And Then There Was Mercy...

Last Sunday I got home from church and checked the cow pasture through the binoculars. I could tell that Mercy the cow was in labor, but didn't see any part of the calf showing yet. Figuring she was probably in the early stages, we had lunch and after resting a little, I went to give the cows some more grass. Still no sign of a calf, so my suspicions were raised. It's not a good sign when a mature cow doesn't progress within a couple hours' time. Plus, at one point Mercy was towards the entrance of the field with a couple other cows who wanted to go find their calves. I felt like that was Mercy's way of saying she knew she needed some help. So we brought her to the barn.

We got her in the chute so we could examine her. Sure enough, dad found back legs...but the lower legs were folded back towards the inside of the cow, so the hocks were presenting first. The normal way a calf should be born is front feet first, followed by the nose and head. Dad was able to get both back feet pulled up without too much trouble, which was good. But a backwards calf is still a difficult delivery for the cow, and she needed assistance. Plus, time is of the essence when a calf comes backwards, or fluid in the lungs will suffocate it if not expelled quickly enough.

Obstetrical chains are strategically wrapped around the legs with handles attached to give us grip. Those legs are slippery!!

Slowly it's coming...Mercy is doing her part by pushing.

He's out! Were we in time? He's not breathing yet, but he's alive. Need to get that fluid out of his lungs. We try beating on his chest a bit...

And though it's a lot of dead weight, hanging him upside down by his back legs lets gravity give us a little help draining his lungs. We also try to tickle his inner nostrils with pieces of straw or anything rough to try to induce some sneezing or coughing.

And finally he starts to take some breaths! After a little bit he's able to start holding his head upright

Now that he's breathing, we can let Mercy do her part to get him cleaned up.

Within an hour, he's standing up and well on his way to maintaining his survivor status!

But the story doesn't end there. The next morning we brought Mercy and the calf into the holding pen when we milked the rest of the cows. Part of her udder was very slack, so it seemed like he had drunk plenty of milk in the night. It soon became apparent, however, that Mercy did not feel very well. When we got her in the parlor we found that she had very bloody milk with a bunch of clots as well (a bit of blood in a newly freshened cow's milk is not all that uncommon, and usually not a cause for concern. This, however, was pretty bad.). Whether the blood was part of the problem or just another issue on top of the problem I'm not sure, but she was coming down with some toxic mastitis. We milked out what we could and doctored her with essential oils before turning her back out. She felt bad enough that she basically didn't have the ability to be concerned for her calf. So I put him back in the barn. My next concern for him was whether he had even had enough healthy colostrum to give him the passive immunity he would need to survive. I tried giving him some good colostrum in a bottle. But he wasn't interested. In fact, I tried multiple times. Warming up the bottle that kept cooling off between tries. He wouldn't take more than a sip or two and fought me tooth and nail when I tried to get him to suck. This continued through the next day!

At this point I began to wonder if the toxins in his mama's milk had addled his brain. I questioned whether he had benefited at all from nursing that first night. But he was so strong in his resistance to me, it seemed unlikely he had not gotten any sustenance since birth! On Tuesday when dad went to check cows before milking he found another cow needing assistance. This time the calf's front legs were back and her head was coming first. We got her in the barn and dad was able to get the front legs pulled up and once again got the calf out in time. But she was a little weak and lethargic because of the trauma, so I tried feeding her some colostrum as well. She was a little slow too, and I could only get a little down her at a time. I tried to research a cause for this pattern and read that sometimes traumatic births can cause calves to not nurse as well. So I'm thinking maybe this was what I was dealing with. Eventually I was able to get the little heifer to start nursing some on her mama, and they are now doing well together.

But back to the little bull. We named him Howard. I knew with the uncertainty of the start he'd had (a calf needs colostrum or survival would be questionable at best), I wouldn't feel right about selling him. And Mercy would not be able to feed him anything for days that wouldn't make him sick even if she wanted to. I had already penned up two other heifer calves to graft on to a nurse cow, so I figured I'd see if I could get him to latch on to the cow. Keep in mind that this calf hasn't had more than a handful of sips of milk in close to 30 hours. He's not acting terribly weak but he's a little hoarse from bawling. And as far as I could tell, he either couldn't, or WOULDN'T suckle, from the bottle at least. Well, it took a minute or so, but once I got Bon the new nurse cow confined enough she had to stand still for the three hungry babies, I was able to direct Howard's head to the general vicinity. And what do you know?!? He COULD suckle! He just had very high standards, apparently lol. If you'd like, you can watch a very short video of his happy tail-wagging-nursing on his new mama. :) Today he and his two sisters and new mama graduated from the grafting process into the pasture with the first two nurse cows and their calves.

And THAT was an eventful start to this week! 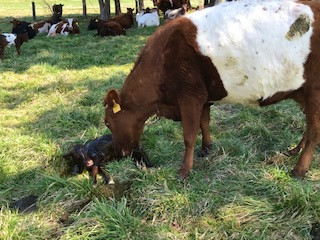 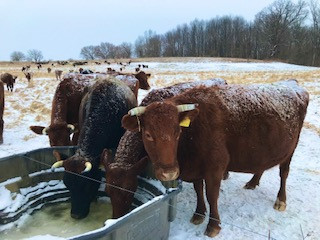 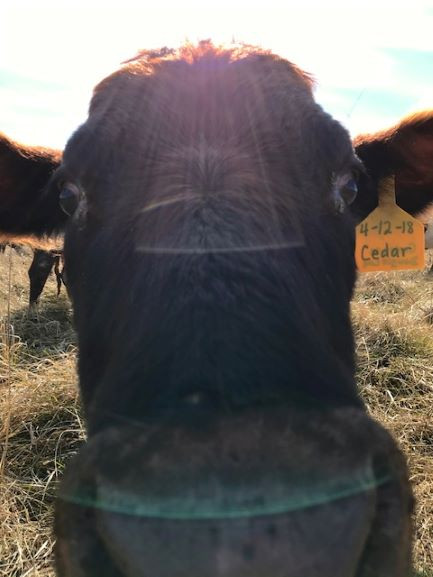