In a previous blog post (Dec 31st), I wrote about some things God spoke to me through Joy the cow. It would seem that the lessons keep coming through this 4-legged creature.

As a little backstory refresher, Joy's survival at birth was fairly miraculous. Her mama, Justice, was in labor and when she didn't progress within an expected period of time I knew I needed to investigate what was going on. Instead of the calf's front feet and nose presenting, my examination found a butt and tail. Baby calves just don't come out that way. The only way to get the calf out was by reaching in far enough to pull the back legs out and pull the calf that way. But it takes a lot of arm strength to do that in a confined space with the cow contracting and pushing against you. I just didn't have enough strength. And dad was making a delivery that day. So Justice had to wait a little longer for dad to get home.

There really is a pretty narrow window once birth begins for the calf to be born alive. By this point, several hours into the ordeal, I wasn't terribly optimistic for the calf's survival. When dad went to work, he was only able to get one of the back legs up, I believe. But amazingly, Justice's pelvic area was big enough that we were able to pull the calf out by just the one leg! Once she came out, she wasn't breathing, but there was still a heartbeat! We tried every tactic we knew to try to get her to take a breath, and finally she did. Wow.

She wasn't out of the woods yet, though, and the traumatic ordeal had left the calf pretty weak and lethargic. Even after some vigorous licking and cleaning from mama, she couldn't stand up to nurse on her own, so we used a bottle to get her to swallow just a few sips of colostrum with her limited strength. After another hour or two, that little bit of colostrum had strengthened her enough to drink a little more! She still wasn't standing up on her own, but we left her and Justice alone for the night. The next morning, Joy proved her resilience, as she had been up and begun to nurse on her own. The significance of her name was related to her survival against all odds, and the importance of being born from Justice.

Now, if these animals had been in the wild and this had happened, neither would have survived. So I recognize that, genetically speaking, there is justification to not keep them in the herd. And then there was the disappointment of Joy not having a calf last year when she was supposed to. Another opportunity to let nature take its course. But I'm stubborn about some things, and I have held on to the fact that Joy had a destiny not yet fulfilled simply because of the miracle of her very existence. So she did not end up in the freezer last year, and she did give birth this spring! But that is still not the end of her story, and I did not foresee the twist in this plot!

Sometimes when a new heifer has her first calf and we begin to milk her, she is calm and stands still when you're cleaning her and putting the milkers on. Sometimes they are uncertain about this very personal attention for the first time and try to tell you they're not a fan by raising their legs or kicking at the milkers for a while, but after a few days they'll adjust to the new routine and sensations and settle down. And sometimes there are cows like Joy. She was a kicker. A fairly violent kicker. You couldn't even touch her without her legs going into motion. In fact, one day I simply started spraying her with the post-dip after milking and she kicked out and injured my finger/hand. The next day she smashed that same hand between her big hind end and the metal rail while I was trying to keep her from kicking while dad put the milkers on. No matter whether we pursued calm and gentle touches, used some corporal punishment, or threatened her with a future in the freezer, Joy never got the message that if she would just stand still, this would be a stress-free endeavor! If you succeeded in getting the milkers on, you had to hold them on, because one little movement, one puff of air blowing past her, or maybe no reason at all, would bring a swift kick with her leg and knock the milkers off. One day she pushed my button one too many times and when she kicked the milkers off I pulled them out of the way to give her a piece of my wrath, and as I quickly dropped them on the floor, the plastic stem broke. Let's just say my frame of mind was not very Christ-like at that moment...

Cows like that make milking stressful. Like, not-worth-it stressful. There was another cow with very similar behavior this spring, and she very quickly quit giving milk. It was a no-brainer what her future would be. But Joy...something just wouldn't let me give up on her. A little bit was because she was still giving milk. But it was more than that. I felt like there was a battle still to be won regarding this cow, or something. In mid April I was at a friend's house for a Passover celebration. I briefly told her about Joy, and that I felt like what God was speaking to me through her this spring was that JOY is a fight. There are a lot of things in this world that seek to rob us of joy. And we can lose our joy if we're not willing to fight for it. I don't know, maybe that's one of the things Jesus implied when he said "the kingdom of heaven is taken by violence, and the violent take it by force." (Matt 11:12) The Greek word for 'violent' can mean 'one who is eager in pursuit', or 'positive assertiveness'. Are you going to let joy be taken from you by the circumstances around you, or are you going to pursue it eagerly? Are you going to fight for it?

As dad and I vacillated between giving up on her (which meant drying her off and putting her on the list for beef this summer) or continuing to hope she would change, I told him, I will give her until it warms up (remember how cold and wet it was this spring?? A component of the irritable cow syndrome our herd exhibited in April!) and see if she improves. I wonder if this cow has a clue how many "second chances" at life she's been given...she's up to at least 3 now.

One day Joy was the last cow on one side of the milking parlor, so I was able to go up and stand beside her and talk softly to her and pet her, rubbing my hands over her back, side, and udder (carefully!). She was much less kicky from the side on that day. I thought maybe it was the beginning of a breakthrough, but it wasn't completely transformational. A couple weeks ago on a Sunday morning a group of cows was going out and Joy was in that group. Doug was outside the barn carrying a piece of plastic post we use in the milking parlor to help move cows along when they won't move, or to administer some discipline when necessary. Joy had had a lot of (unproductive) discipline... Doug said when she walked past him, he saw fear, presumably because of what he had in his hands. I felt like that was pretty telling.

The next day, part way through milking, Joy was still in the holding pen. I approached her as close as I thought she'd stand for, and looked her in the eye. I told her we'd gotten off to a bad start, and did she want to start over? And then I cast out the spirit of fear and any other demonic spirits in Jesus' name (remember, the Bible records a legion of demons entering a herd of pigs...). I started telling Joy that she was going to be a good girl as I would prep her for milking. Making declarations is important, because our words have power. That same day, I believe, was the first day for Sarah, our summer intern, to help with milking. I asked her if she wanted to try some cow whispering with Joy when she ended up in last position again in one group, so she did, giving her more gentle touches. And you know what? Joy is improving. She's not 100% without movement reaction when we go to touch her, but the kicking is not much most days. She generally seems calmer. I don't know how much of a role the warm weather played, how much was removing a spirit of fear, and how much was me trying to get rid of my own frustration with her, but I'll take it.

If you are battling discouragement, are feeling anxious or broken over the apparent state of affairs in this world, or are desperate for some hope, I promise you that Jesus Christ is the source for all that needs fixing. He lifts us up, he redeems even what seems past saving, and offers us hope not only for eternity, but also for today. And JOY that cannot be contained. Don't settle for less than all He has purchased for us with His life. Fight for it. 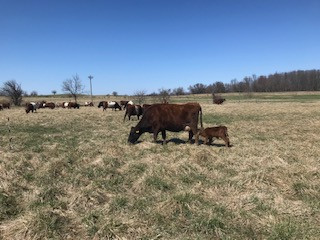 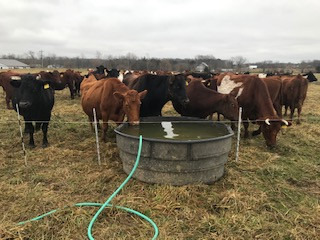 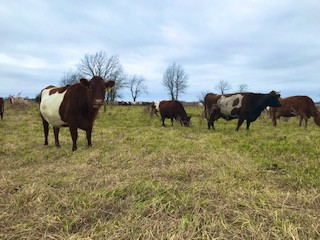