In a Dutch oven, do a quick searing/browning of the meat chunks over medium high heat, then set the meat aside.

Melt lard (or butter) in the Dutch oven and saute the onion until translucent.  Then add the garlic and caraway seeds for about a minute. Use enough of the beef broth to deglaze the pan a bit, then toss in the meat and add the paprika, stirring well to distribute it evenly.  Pour in the rest of the broth, diced tomatoes, bay leaf, and salt and pepper.  Stir and bring to a boil, cover, then reduce to a simmer for about 3 hours or more (until the meat is tender).

Add the carrots, red peppers (I had green peppers in the freezer hence the green in the picture :) ), and potatoes. Cover and simmer for 30 minutes more.

Serve in bowls with sour cream and good bread for dipping.

NOTE: Basically any cut of beef works, but the less tender the cut, the longer the slow-cooking time needed to tenderize it.

NOTE 2: If you don't have time to monitor a pot on the stove for part of the day, you can do the first steps on the stove and then put everything in the crockpot to cook for several hours, or in the instant pot for a shorter overall cook time as well! 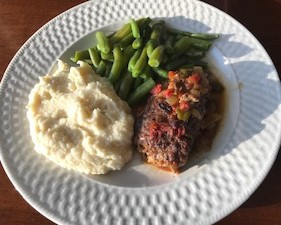 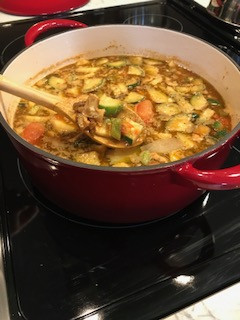 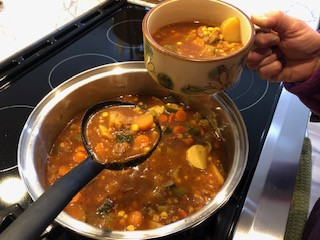